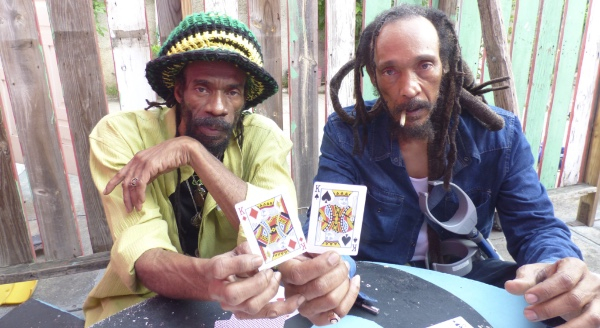 Formed in 1975 by Cecil "Skelly" Spence, Albert "Apple" Craig and Lacelle "Wiss" Bulgin. Israel Vibration is certainly one of the most popular reggae band in Europe, still backed by The Roots Radics.

Suffering of polio, the three members of the band met in a healthcare center and the music became the best way for them to live and participate in the betterment of their contemporary. Their first albums recorded at the famous studios Treasure Ilse and Channel One met big success in the U.K. Unfortunately, in 1983 the band split and the three men left separately in the U.S. for treatment. Five years later the boss of Ras Records offers them to rally and the trio eventually released the now classic albums "Strength for Life", “Forever”, “Alive”, “On The Rock”, "Free to Move", "Jericho" …

Their last album Reggae Knights was recorded at Jimmy Cliff's studio (Sun Power Productions) in Kingston and released in 2010. It is a new important step in the discography of the band ! Wiss and Skelly still defend the traditional values of "Roots" since their debut in 1976, and remains faithful to their ideas and their line of conduct determinedly pacifist and turned into the love of people and life.