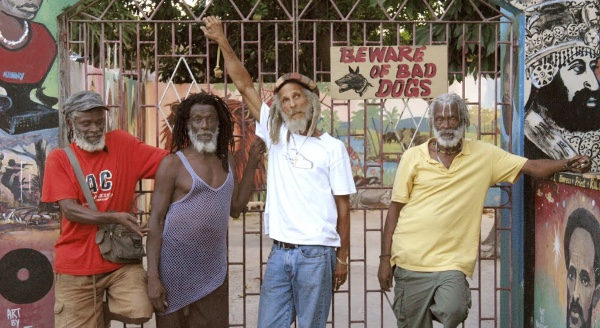 At the beginning, The Congos was a duo comprised of Cedric Myton and Roydel "Ashanti" Johnson. Cedric Myton grew up in St. Catherine, Jamaica and began his singing career as a member of the rocksteady band The Tartans in the late '60s, and Roy Johnson, a native of Hanover, Jamaica, grew up singing spirituals at home and collaborated with Ras Michael and the Sons of Negus.

Their distinctive vocals: Johnson's strong, clear tenor and Myton's breathtaking falsetto, led them to work with such major musical talents as Sly Dunbar, Ernest Ranglin, and "Sticky" Thompson… But it is their collaboration with Lee Perry at his Black Ark Studio in Kingston, which led to the release of the masterpiece Heart of the Congos in 1977, one of (if not the) finest production job of Perry's long and prolific career, which really set them up as worldwide inescapable reggae artists.

Unfortunately not long after the record was released, Myton and Johnson went their separate ways and as solo artists, they have never again captured the magic of Heart of the Congos. 30 years after, The Congos were back together with the album Swinging Bridge released in 2006 and they performed in the biggest European Festivals (Roskilde, Dour, Afro Pfingsten, Musiques Metisses, Summerjam, Uppsala etc.). For the production of their last album Back in the Black Ark released in November 2009, they worked with Lee Perry himself and the result is one more jewel piece of roots reggae music !